Does Easter seem disconnected from the anxieties and tensions in your life and in the life of our nation? It wasn’t so for the first Christians, according to their written accounts collected in the New Testament. They certainly experienced worries and conflicts, with polarization and mistrust at least as extreme as what we currently face, but the Resurrection transformed their communities and relationships in ways we can hardly imagine hoping for.

Every year, on Easter morning, the first reading recounts a particular speech of Peter’s testifying to Jesus’s Resurrection: “This man God raised on the third day…” (Acts 10:40). But the lectionary never presents the speech in its full context, which is a dramatic and miraculous overcoming of an acute form of polarization.

Division between Jews and Gentiles was so extreme that, as Peter explains, it was “unlawful for a Jewish man to associate with, or visit, a Gentile” (Acts 10:28). It’s difficult for us to grasp that kind of division as a daily reality, but let's try. What kind of house would you be uncomfortable visiting, even to the point of moral revulsion? For me, it might be visiting our president in his Trump Tower penthouse, decorated wall-to-wall with carved marble and gold. Or, I can try to imagine visiting the dingy house of a known child molester. There's not only the personal discomfort with being in such a place but also the apprehension—if not panic—about how others will react when they find out where you’ve been. 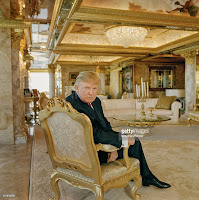 So Peter is understandably disturbed when he discerns God telling him to visit the house of a Roman centurion named Cornelius. His uneasiness turns to complete amazement when, as he gives his testimony (the one we heard read on Easter morning), it becomes clear that this Gentile is receiving the gift of the holy Spirit—the very same Spirit that he himself had received with the apostles not so long ago. Though just a day earlier he would not have considered even entering a Gentile’s home, he now finds himself exclaiming, “Can anyone withhold the water for baptizing these people, who have received the holy Spirit even as we have?” (Acts 10:47)

What was it that made it possible for Peter to make this leap? It seems that even Jesus had a strictly “Israel First” policy. Do you remember his reaction when a Greek woman asked him to heal her daughter? “Let the children be fed first. For it is not right to take the food of the children and throw it to the dogs.” (Mark 7:27) Jesus questioned certain sabbath regulations, but he was also known to say, “Do not think that I have come to abolish the law…” (Matthew 5:17). So Peter was not simply following Jesus’ instructions in any straightforward way.

Rather, Peter's declaration may be one of the "greater" works Jesus spoke of in the Gospel reading we heard on the Fifth Sunday of Easter. What seems to have happened is that, following Jesus’s resurrection and ascension, and having received the Holy Spirit he promised, the disciples’ hearts and minds were transformed over an extended period of time. For Peter, this—no doubt bewildering and painful—process ultimately enabled him to declare clearly that “God shows no partiality. Rather, in every nation whoever fears him and acts uprightly is acceptable to him.” (Acts 10:34-35) To us, the beneficiaries of his witness, this truth about God seems boringly obvious. Not so obvious, however, are the solutions to our own family conflicts and our country’s polarization.

So it might be worth taking a fresh look at the explanation Peter gave following his bold declaration (Acts 10:36-43) and asking whether we are open to experiencing afresh the pascal mystery that so reshaped his heart and mind:


“[God] proclaimed peace through Jesus Christ... He went about doing good and healing all those oppressed by the devil... They put him to death by hanging him on a tree. This man God raised on the third day... He commissioned us to...testify that he is the one appointed by God as judge of the living and the dead. ...that everyone who believes in him will receive forgiveness of sins through his name.”

When we think about polarization, we think mainly in terms of sociology or psychology, of the impact of economic trends or new forms of communication. But there is also a theology of polarization and its overcoming that offers insights and hope for our current struggles today. I hope to explain more in future posts.
Posted by Tim at 8:59 PM No comments: